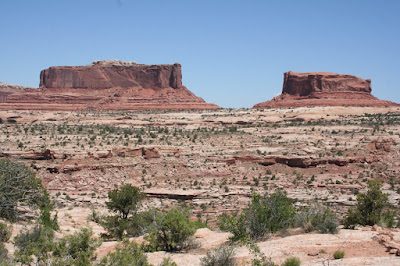 Moab was an ABSOLUTE BLAST!!!!!

I can not wait to go back again! I’d been to Moab before and toured Arches, but I missed the other cool stuff in the area! We drove down on Thursday night after dropping the furrkid off at Brent’s cousin’s house. (Their kids were UBER excited to have Sadie come stay with them.) We took the little red card to save on gas and parked the Tahoe. (Smart choice – left $$ for souvenirs!) 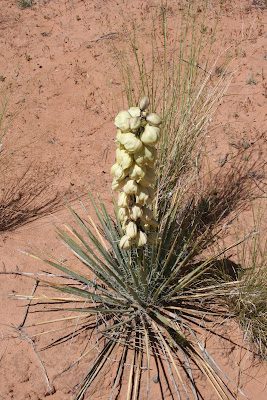 We slept in on Friday and then spent the rest of the day exploring the area around Moab. We went to Canyonlands National Park and Deadhorse POinte State Park. We decided to skip Arches because we’d each already been there and wanted to do new things on this trip.

The area around Moab is absolutely beautiful. It’s desert and “barren”, but it is it’s own kind of beautiful. We spent some time hiking and GeoCaching along the way. We stopped at GeoCaches along the highway and in the parks. Brent downloaded all of the ones in the area to his GPS unit. I’ve never been a fan of “southwestern” decor and plants, but we saw some really interesting and pretty cool plants this trip. 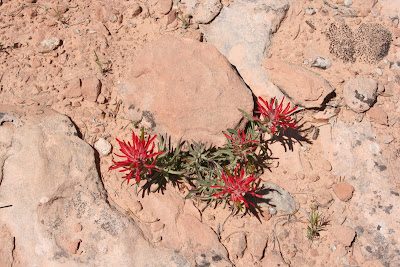 Here’s B getting into a Cache on the way to Deadhorse Pointe.

He had so much fun with his GPS unit. I probably could have sent him and Mr.GPS on their own little trip! 🙂 We did the 2.2 level caches so that I’d be able to handle the terrain with my goofy knee. GeoCaching is getting addicting! 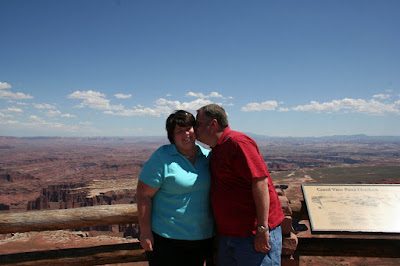 Here we are at a “virtual Cache” near Deadhorse Pointe. My sweet B is always trying to sneak in a smooch! We set the camera on the tripod, set the timer, and voila!

Deadhorse Pointe
It was a bit hazy, but still absolutely breathtaking! Yes, I DID peer over the edge to snap the photo without having a panic attack! We are actually standing ON Deadhorse Pointe looking at Big Bend (the bend in the river) I always thought that DHP was that point sticking out into Big Bend… nope!! 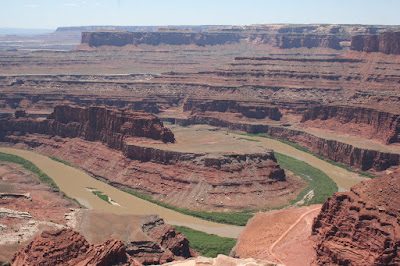 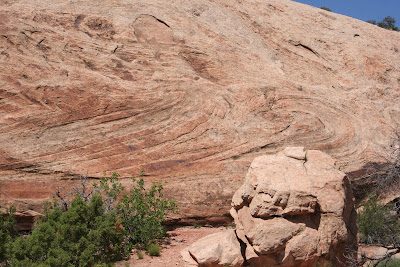 The rock formations were sooooo neat! The Moab area is a Geologist’s treasure trove! I was particularly fond of these neat swirls in the rocks. There were different patterns and designs all over the place. I had so much fun snapping pics of everything! 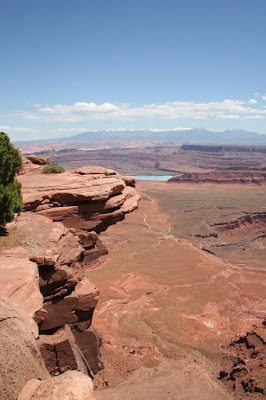 It’s kind of hard to tell in the picture, but the rocks on the left are ledges… the bottom right section of the pic is hundreds of feet below us. Those lines are dirt roads.