Let’s break up the string of cupcake cards and share this fun little project instead.

Last Thursday night we had an Enrichment meeting for church.  We had a garden style tea party and celebrated the female leaders in our church history.  It was loads of fun.  Some of the sisters dressed up in period clothing dating back to the pioneers and most came in modern day clothing, but lots of people wore a “tea party hat”.   We had a little “contest” and had two prizes.   This is the prize I contributed for “Second place”…. First place won a mini toy tea set.

I wanted to use the Cupcake set from Skipping Stones Design again, but didn’t necessarily want to make a cupcake item.    I raided my stash for a candle and pulled this strawberry-kiwi scented one out and dolled it up a bit. 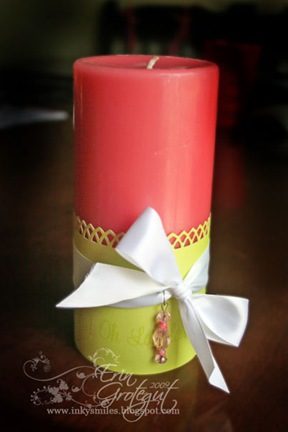 I just love the “Oh La La!” sentiment.  It’s girlie and screams frilly! 🙂  I cut a strip of Kiwi paper from CTMH to fit the candle and then punched a border with Martha Stewart’s Lattice Border Punch (cuz it was sitting on the desk and I didn’t like the scallopy one I originally tried) and then stamped the sentiment around the bottom of the Kiwi paper.  Gotta add a big fat bow, too! 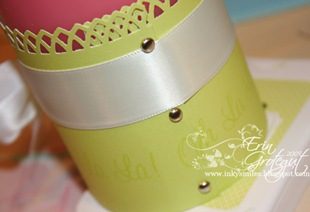 The ribbon is just wrapped around the candle and tied in the front.  I glued the paper to itself with my ATG gun and then poked holes in the candle, added a drop of Liquid Glass, and then poked silver brads in the holes to better secure the paper. I think the brads look like cute little buttons… hehe. 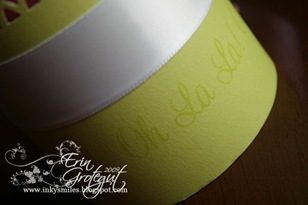 Tone on tone stamped sentiment.  I inked up the sentiment stamp in Kiwi ink and went to town…. benefit of clear blocks and clear stamps – you can stamp in a straight line! 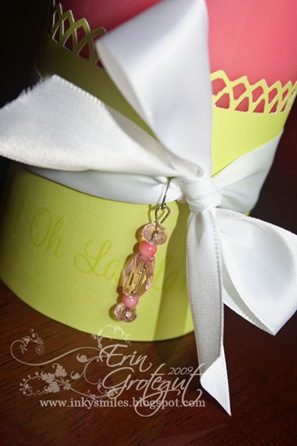 I didn’t originally have the charm on the candle but I decided it needed something extra fun…. I was playing around with beads again prior to making the candle and decided it needed a charm.  So I loaded some Czech glass beads up on an earring wire and played around.  I like how it turned out!

And I liked it enough to make a pair of earrings, too! LOL!   I’ve gotta get some more of the little pink beads so that I can make a bracelet to match!  {This photo shows the closest to the REAL color of the chocolate cards.}

I think I’m going to need a bigger jewelry box….

6 thoughts on “Oh La La! A Summer Candle with Charm”