So I have already failed my goal of blogging once per week.  I have no excuses.  Really.

Immediately after we moved here, like the first or second Sunday we were at church, I was asked to be the Bear Cub Den Leader.

At first I was all, “What the what? What are you smoking?”

And, “I am SO not a little boy person. WHAT ON EARTH DO YOU DO WITH THEM?”

So I fought through my denial.

And so far I have survived. 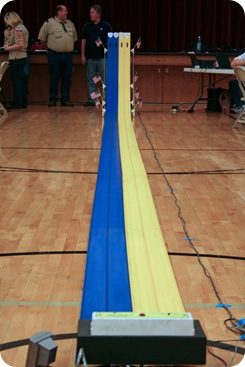 So this past Saturday was the Pinewood Derby for our ward (aka congregation).  The boys asked if I was going to make a car.

“Uhm, yes, of course! And I’m going to paint it pink and bling it out.”

Their responses: “You can’t have a pink Pinewood Derby car!”

followed by, “Are you going to put DIAMONDS on it?”

To which I replied, “Oh yes! LOTS of diamonds!!”

But… I procrastinated and procrastinated until the night before the derby… like until 10 pm the night before the derby.  Brent was not happy…. but we dug the band saw out of the mess in the shop and I sketched the lines on the block… and cut out the car.   And then sanded… and sanded… and sanded… thank goodness for a drum sander or we’d not have made it in time. 🙂

Here’s what I started with once it was all cut out…. I really wanted to taper the sides in more, but we didn’t have time. 🙁 booo! 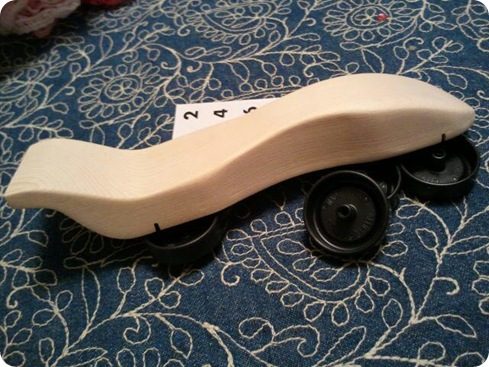 I couldn’t decide on pink or teal… but ultimately I went with, yep, you guess it, PINK.   I mixed some plain old acrylic paint by Plaid with some shimmering Create A Shade pink by Close To My Heart to get a pearlescent sheen.  Plain ol’ pink was too flat… 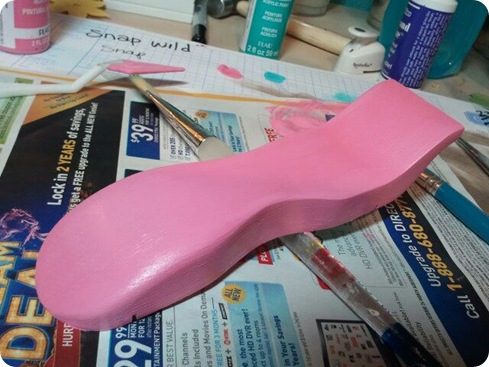 Once it was nice and dry (note that it was midnight when I was painting.. oy…) I hammered in the wheels.   BSA Derby Car wheels are nailed into the little slits with a regular nail… and if you are not careful, or are in a hurry, or it’s 1230 am and you can’t keep your eyes open, you end up with this…. 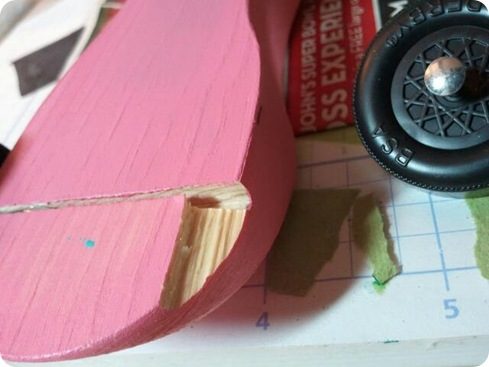 Crap. Crappity Crap. Crap, Crappity… yes, I said Crap on my blog.  It could have been worse.  I was frustrated…. so I painted some wood glue into the chipped piece and squooooshed it back together and let it dry.  It would have to get the last wheel on in the morning….

I pulled out all the bling and went to town… This is what happens at 1 am when you’re trying to bling in a hurry…. 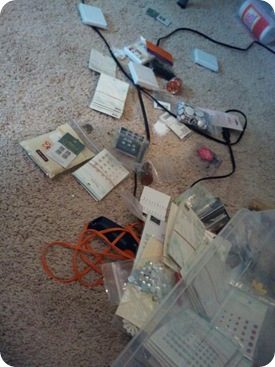 I blinged my little heart out while Brent sat down there in the studio with me… He entertained himself with Mythbusters… and of COURSE they were blowing things up. I mean, we needed some manliness happening in the room while I blinged out a pink Pinewood Derby car. 🙂

Check out them wheels…. Sparkley….. 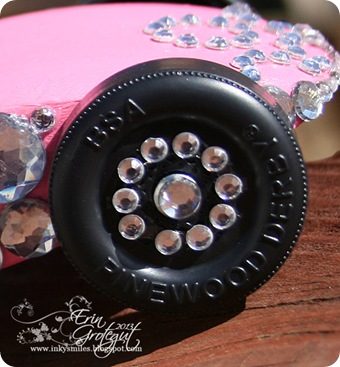 I just love how it says “BSA Pinewood Derby” around all that sparkle. *Giggle*

When it was all said and done my car weighed in at a whopping 2.5 ounces.   Pinewood Derby car max weight is 5 ounces.  I was nowhere close, but that’s all good.  I wasn’t planning on racing it anyway. I just made it for fun to show the boys that I wanted to have fun with them. 🙂

E6000 glue plus some rhinestones and bling = Heaven. 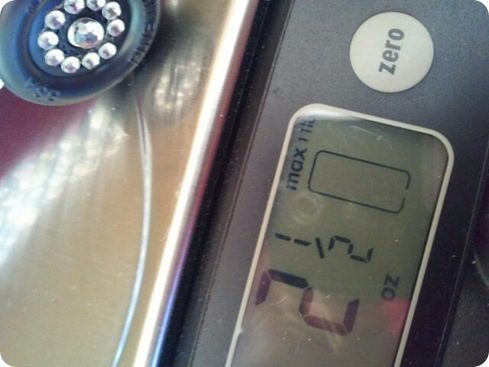 I love this little car… It was so much fun to make!

I even included a princess tiara… cuz that’s how I roll…. 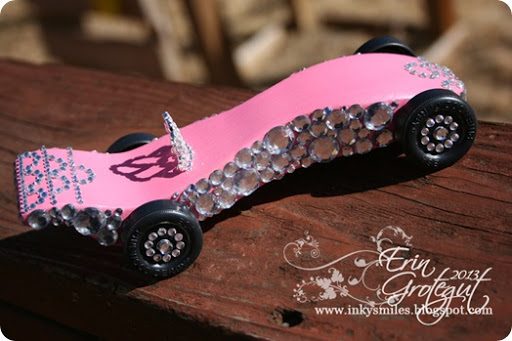 And I was digging some scalloped, lacey trim…. If I had had some silver paint I would have painted some silver flames up the front of the car, coming from under the hood jewels… 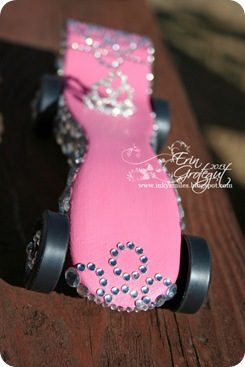 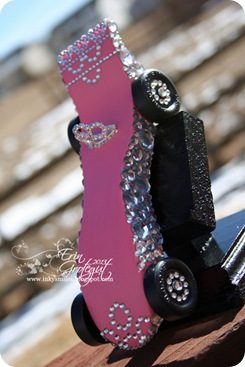 We had SO much fun at the derby… ALL EIGHT of my awesome Bear Cubs came and brought their cars.  They were SO adorable and made super cool cars  (I wanted to snap a pic of their cars, but they were all mixed in with the rest at the check in table. I also am not sharing a photo of my boys because I did not ask permission from their parents to have them on my blog….)  One of my boys, Jacob S, took SECOND place out of the entire Pack.  WOO HOO!

Here are most of the cars…

There was even an “adult cars”.  Here’s the gang… Left to right: The Bling Machine, The Car from the Closet (Palmers found it hanging out in a closet at their house), The Green Hornet Car, and Coooooool Runnings – the Bobsled. 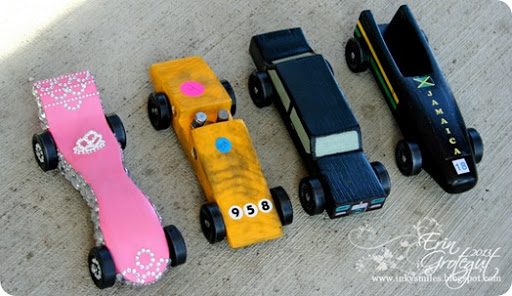 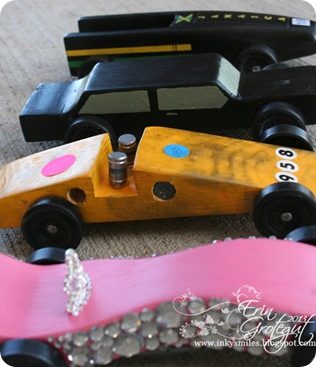 It took a while to get everyone checked in and weights tweaked… some cars had to drill out some excess weight and some, like mine, had to add weight… a LOT of weight.  Nearly the entire bottom of my car was covered in little weights…  (Thank you Kelly!!)  Kelly decided it NEEDED weight in order to even make it down the track.  At 2.5 ounces it probably wouldn’t go very far…. after she superglued the weights on it weighed in at 4.90 ounces…. and yes, it made it out of the gate. 🙂

We had a blast watching all the cars race down the blue and gold track.  The boys were whooping and hollering to see their cars fly down the track.  We all gathered in chairs around the track. 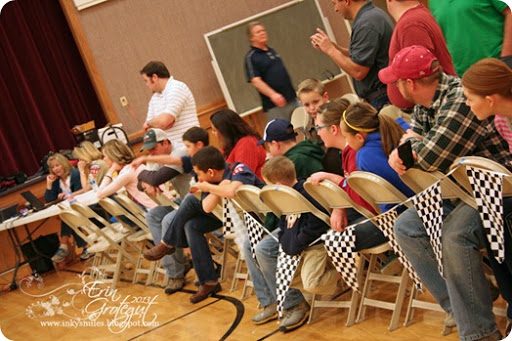 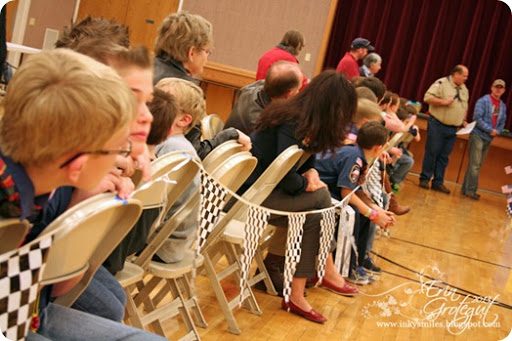 I tried to get GOOD pictures of the cars flying down the track… but when a teeeny weeny car is flying down a track, all you get is pretty much this: 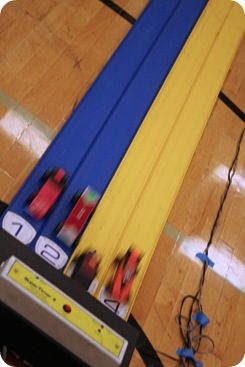 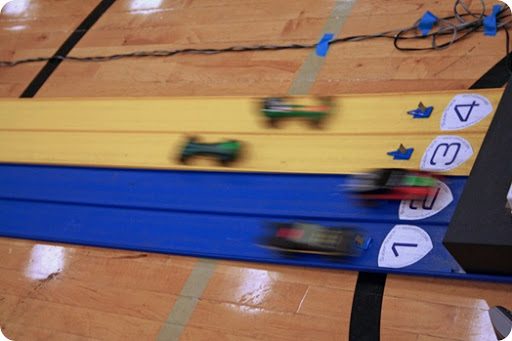 Those little stinkers just FLEW down the track…

Even the adult’s cars flew down the track… I think my car should have been Pink Lightning….even though it consistently placed third.  Hey, at least it wasn’t LAST… and it was my first very own Pinewood Derby Car.. 🙂  See, look, there she is… Lane 4.  GO PINK! 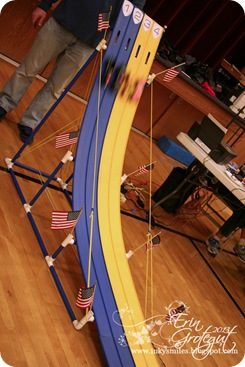 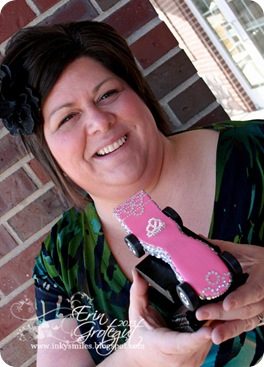 4 thoughts on “The Derby… Blingsta Style”